Trending
You are at:Home»Cuisines»The triumph of sushi: from Japanese purity to fusion
By LookOut on Thursday July 4th, 2019 Cuisines

While 30 years ago there were those who asked for a knife and fork to eat a piece of sushi, its success has been so great – whether in its original form or combined with ingredients from other countries – it is now enjoyed by everyone. It even has its own World Day, which is celebrated this Tuesday.

In “Sushi, ramen, sake” (Salamandra), journalist and chef Matt Goulding claims that the origins of sushi date back to the 8th century in the Ginza neighbourhood of Tokyo, where you could find fermented fish with boiled rice. Sushi in its modern form, however, would not arrive until the 19th century, with street stalls selling plates of the finest catches from the Bay of Tokyo above a ball of rice with vinegar, grated spicy radish and soy sauce.

This is where all the world’s best sushi restaurants are found, including the restaurant owned by Jiro Ono, the star of the Netflix documentary series “Dreams of Sushi”.

Sashimi (slices of raw fish), nigiri (fish and rice) and makis (wrapped in dehydrated seaweed), however, have since crossed over the Japanese borders, slowly but surely finding a regular place in the diets of Spanish people. It has even reached the point where sushi is now one of the most commonly-ordered takeaways, alongside hamburgers and pizzas.

This broad selection does not always correspond with good quality. Mario Payán, one of Spain’s most highly regarded sushi chefs, told Efe that “everything is a bit adulterated”; mainly because Spanish kitchen staff do not have to train for several years, as is the case in Japan.

“There’s lots of rice with a fillet of fish on top, and not much sushi”, said Payán, who spent 15 years working in a sushi bar before opening three Kappo restaurants in Madrid, each holding an in-demand ten-person bar from which diners can watch the chefs mould the rice and precisely fillet the fish, culminating in a real nigiri celebration. 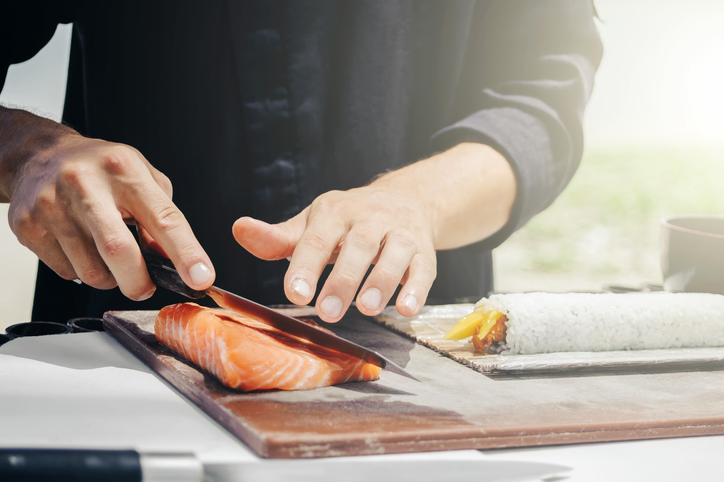 Talking about the importance of rice, Payán commented on the importance of “the precision with which it is moulded [and]the temperature and humidity [at which it is cooked]”, adding that the fish “needs to be treated with the utmost care and attention, in the same way, that you wouldn’t cut a leg of jamón ibérico with a hand saw”.

Another proponent of orthodox sushi is Kiro Sushi (Logroño), where Félix Jiménez received a Michelin Star in 2017, only 2 years after its doors first opened. This restaurant now has one of the biggest waiting lists in Spain, catering exclusively for 10 people at a time.

This “riojano with a Japanese soul”, as he referred to himself in an interview with Efe, is a proponent of classicism in his sushi bar after training alongside Yoshikawa Takamasa. Here, nigiris with koshihikari rice are prepared in front of the diners: “a highly-regarded and aromatic variety” with “the best cuts” of Spanish fish, such as bream, bonito, Virrey or red tuna.

In many cases, the sushi tradition is continued by Japanese masters who are now residents in Spain. This is the case with Hideki Matsuhisa, whose nigiris were the best that Ferran Àdria had ever tasted. Born in Toyota (Japan) in 1972, Matsuhisa arrived in Spain in 1997 barely able to speak Spanish. He now has four restaurants in Barcelona, including Koy Shunkam, and one Michelin Star in Spain.

Masao Kikuchi was a worldwide success before bringing Tokio Taro to Madrid in the 1990s, which ‘bred’ talents such as Ricardo Sanz (Kabuki Group). After cooking for Emperor Hirohito and at-the-time Prince Felipe, this ‘sushiman’ moved to Marbella and then to Malaga, where he turner Rocío Sushi & Tapas into a culinary reference, which is now in the capable hands of one of his disciples, Juan Bautista.

There are other examples of successful alliances between Japanese and Spanish chefs, such as the partnership between Toshio Tsutsui and Álvaro Arbeloa, who met each other while working in Mallorca. With restaurants in Marbella and Malaga, their Takumi restaurants offer an orthodox and excellent selection of sashimi, migiri, gunkan, hosomaki and futomaki.

Straying from the traditional form, “sushi fusion” has also been a huge success in Spain. The pioneer for this style was Ricardo Sanz of the Kabuki Group, who now has four Michelin Stars and restaurants in Madrid, Tenerife, Malaga and Valencia.

He conceived the so-called “kabuki cooking”: a crossroads between Japanese cuisine and the Mediterranean cuisine that created the school. Some of Sanz’s most emblematic nigiris include butterfish with truffle, quail’s egg with onion and wagyu burger with caramelised onion and tomato.