Trending
You are at:Home»Sound & Sense»Are you ready for the Weekend Beach Festival 2019?
By LookOut on Thursday March 28th, 2019 Sound & Sense

Weekend Beach Festival closes its line up with the explosive and hugely popular singer BECKY G, the addictive reggae of MORGAN HERITAGE and techno legend LAURENT GARNIER. It also announces its official poster for days and confirms by surprise the Welsh rock metal band SKINDRED

A finishing touch of 26 artists along with leading names from the electronica scene such as NGHTMRE and other artists like SFDK, JUANITO MAKANDÉ, FUEL FANDANGO, MAKA, SECOND, CHE SUDAKA, LOS ZIGARROS, VARRY BRAVA, GONÇALO, PJ SIN SUELA, VALIRA and many more already confirmed to play.

The hugely popular BECKY G is booked to perform at what’s geared to be the most exciting and explosive WEEKEND BEACH FESTIVAL TORRE DE MAR alongside other national and internationally renowned artists. The American singer, songwriter and actress of Mexican descent will perform on the beach in Malaga this July, where she’s sure to woo the “weekers”. BECKY G is the woman behind global hits like “Can’t Get Enough”, “Sower”, “Mayores” (together with Bad Bunny) and “Sin Pijama” (with Natti Natasha). The iconic singer, who made a name for herself by covering popular songs online, is currently the queen of the Latin boom and musical awards, and the Billboard Latin Airplay Charts.

The Brooklyn band MORGAN HERITAGE is also an essential part of this year’s festival. Their classic and addictive reggae boasts an authentic formula that’s constantly evolving. This family’s extraordinary deftness in bringing their reggae sound to the four corners of the world is huge and they will show this once again at Weekend Beach, where they present their latest album “Avrakedabra” live, which they produced along with respected musicians like Ethan Long, the guitarist of Kings of Leon, “Bassie” from Fire House and the drummer Gil Sharone. They will also have a very special guest, Jemere Morgan, performing with them in Torre del Mar.

Electronic music has always played an integral part of the WEEKEND BEACH FESTIVAL and this year is no different with the techno legend, DJ and producer LAURENT GARNIER, who has been at the forefront of the electronic scene for years, headlining the closing day on the Sunrise Stage. He’s been named the best DJ in the world on several occasions and is highly respected by the godfathers of techno in Detroit and the newer generation of techno lovers. GARNIER loves to explore sounds and genres and has become a massive influence on his successors. NGHTMRE, the man responsible for taking dance music to another level is also on the line up at Torre del Mar. His collaborations with Zeds Dead and Dillon Francis have catapulted him to success with an exclusive sound at the forefront of creativity. This section is completed by the resident DJ GONÇALO, ANTONIO HIERRO DJ, REYMON DJ, INT, RODRIGO TORÉ, MURIEL DJ, GIOSER and DJ SILVER.

Fusion and mestizaje rhythms couldn’t be better represented with one of the starts of the moment, JUANITO MAKANDÉ also on the line up. He’s built himself a very successful career with four albums already released, and an endless number of concerts played to date. Song by song, poem by poem, he’s gained recognition from the public, press and professionals as one of the most remarkable artists on the Spanish independent scene. CHE SUDAKA are back with their authentic and recognisable sound that mixes Latin American folklore, Jamaican rhythms, electronic games and a punk attitude. “Weekers” will also be treated to the three-dimensional restlessness of the duo FUEL FANDANGO, who give dance music another dimension somewhere between soul, flamenco and R&B. VALIRA, the new project from Juan Zanza, the guitarist with La Raíz, will show him as a clear frontman, never forgetting where he comes from but very clear about where he’s going. MIGUEL CAAMAÑO (Alma de Léon on Radio 3) puts the mic to one side and jumps on the turntables to take the “weekers” on a fabulous journey through reggae music and all its musical varients (soca, ragga, dub, dancehall).

Generational hip hop is very present with the confirmation of one of the genre’s most veteran couples, who are also celebrating 25 years in the business this year, the Sevillian SFDK. Direct, brilliant and relentless, the Sevillians always pull a huge crowd wherever they play with their addictive rhythms. On the flip side, we have the young guns MAKA with their new sound that mixes urban and Latin sounds and has been streamed more than 70 million times. The Puerto Rican urban singer-songwriter PJ SIN SUELA is sure to mix it up in Torre del Mar with his particular “Sandunga” and the party vibe that always accompanies him playing between humour, hints of acidity and dance.

The Tormo brothers, LOS ZIGARROS have entered the charts with their latest rock&roll track “Apaga la radio” which they’ll blast out at full throttle, while SECOND, who hail from Murcia, will play more sublime indie acting as a beacon of light full of intensity and emotion at the festival. The vibrant and fun VARRY BRAVA return once again to shake things up with that vitalist fury that follows them wherever they go, creating good vibes in all their live shows. Classic rock and new trends come together in MISS OCTUBRE, a group formed by Alfredo Pedrafita de Barricada and Agnes de Lilith, who bring pure rock and all its variants in their distinctive sound. REVOLTA PERMANENT promise to give the crowd something to talk about with their music that lies between rock and electronica. The band’s eight members are some of the best and most recognised producers in Spain. Each of them contributes different perspectives and ways of working on the same raw material. The Madrid group RUSOS BLANCOS close this block with their iconic, emotional, abrasive and stimulating pop sound. 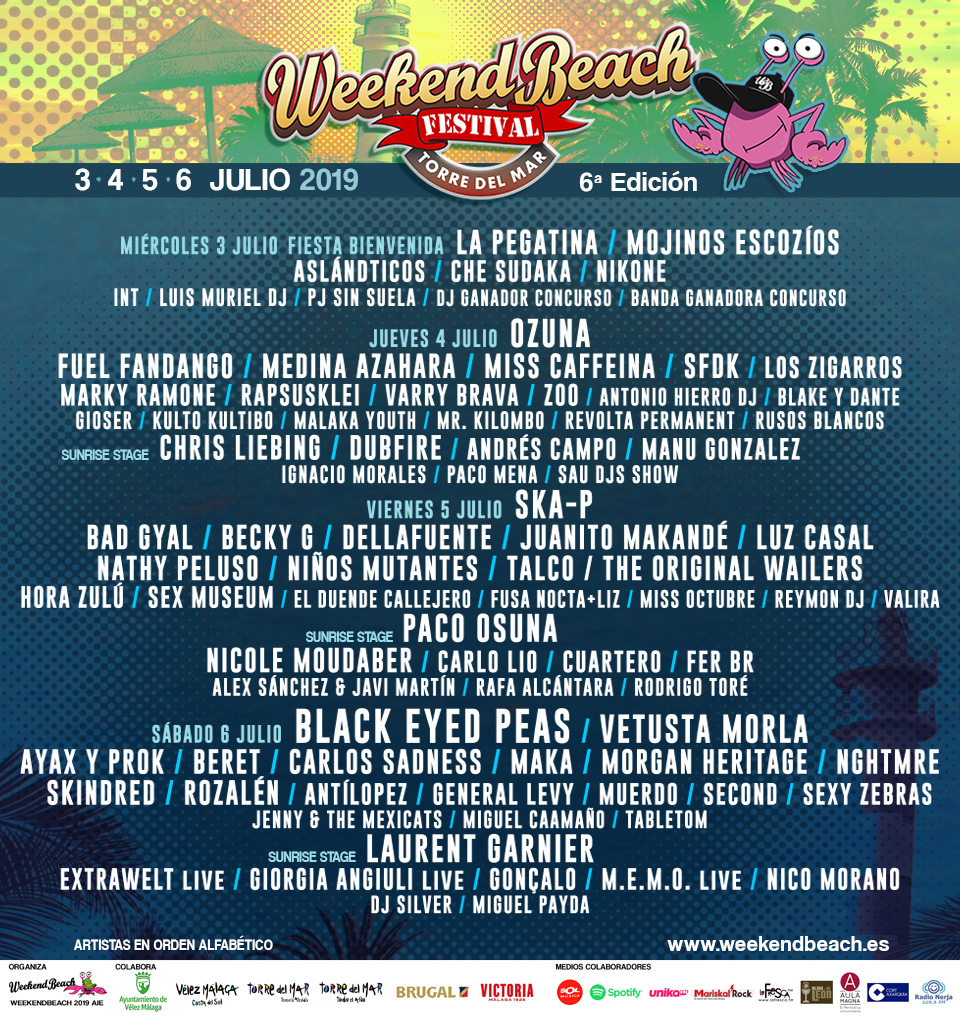