Everybody wants to find out which are the best cenotes in the Riviera Maya and know the particularities and atmosphere of each one.

If you’re still not sure what a cenote is, and why tourists and locals alike love them, we have several reasons here for you to love them too.

So, keep reading to find out exactly what a cenote is, which ones are the most popular in the Riviera Maya and what makes each one so special.

To begin with, what’s a cenote?

A cenote is an underground chamber or cave that is filled by freshwater coming from rivers and, sometimes, from seawater.

These holes, which lie deep in the earth, are formed because the water that comes from either the sea or the land filters through and dissolves the limestone rock, creating underground cavities and underground river networks.

In the Riviera Maya, cenotes are formed by the properties of the limestone which makes up most of the soil in the Yucatan Peninsula. Because of its porosity, limestone also allows the water to filter and fill the underground tunnels, caverns and caves. Very often, the wear and tear produced by the water causes the “cave” ceiling to collapse and leave the cenote exposed, but sometimes the ceiling or roof remains closed entirely or partially, and these are known as underground or semi-covered cenotes. 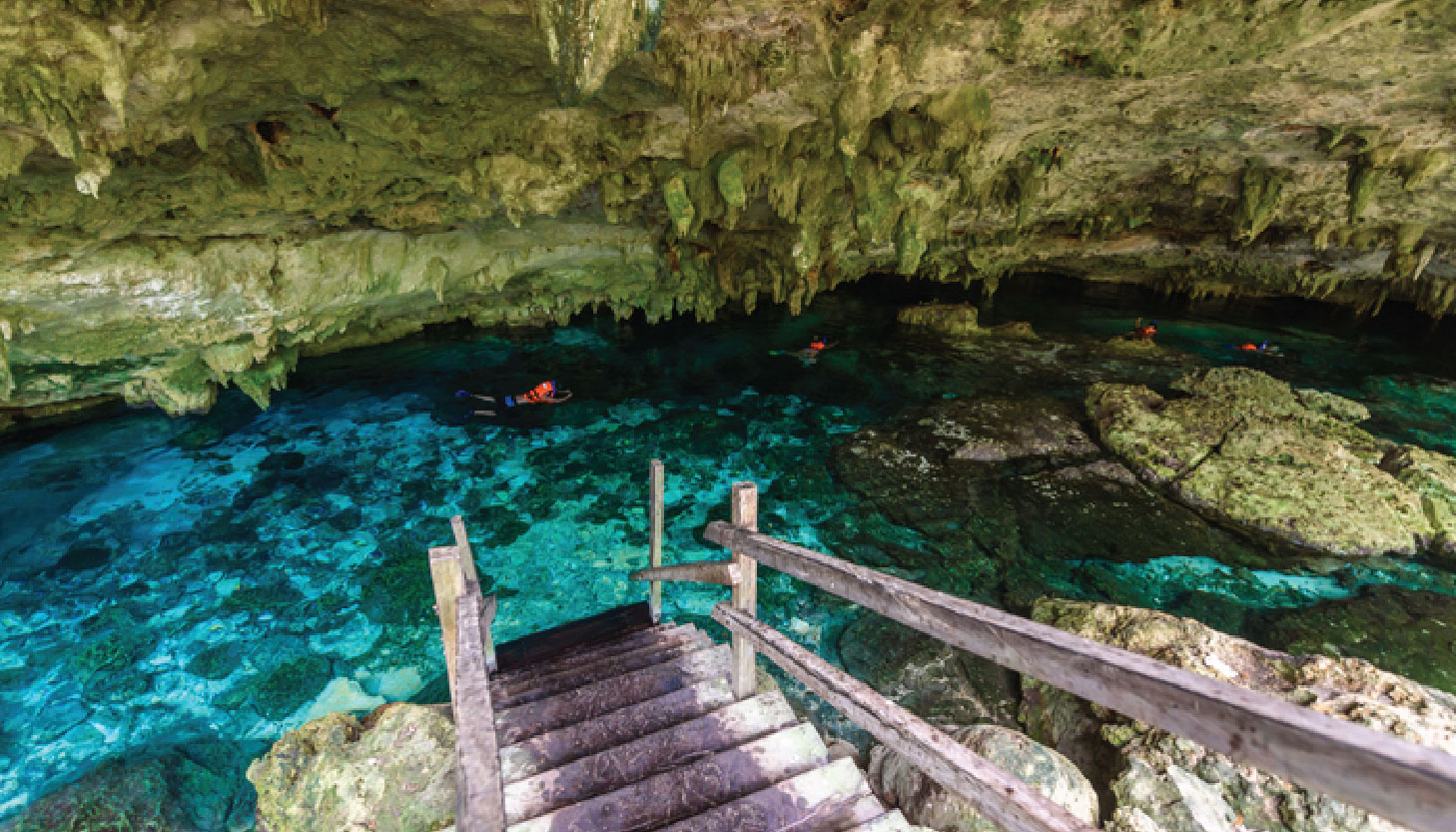 Cenotes are connected to each other, and, eventually, to the sea, creating complex underground networks where fresh and salt water mix in perfect harmony.

The landscapes surrounding the cenotes are more than impressive: walls completely covered with vegetation, crystal clear waters, rich in marine biodiversity, etc. In the past, many of them were considered to be sacred, and offerings were made to them, so they could continue to share their benefits with the communities.

The magical relation between the Mayans and the cenotes

Cenotes are a window to the world of the dead for the Mayans, and they used them to perform rituals to communicate with the gods of the afterlife.

One of the better-known rituals was the “Chak Ku”, which consisted of throwing victims, mainly children between the ages of 3 and 11, into the cenotes. Now, you may ask yourself, what was the purpose of such a sacrifice? Well, for the Mayans, blood was the most divine and special gift they could offer the gods.

But, now let’s move on to something happier and more important!

Top 10 cenotes in the Riviera Maya

It measures 61m in diameter, and a has a carved stairway that leads down to the swimming platform.

This is a partially open cenote with the roots of trees and rays of light penetrating through the small hole in the dome of the cenote to magically illuminate the surface of the water. It also has a wooden stairs to access the depths of the cave. 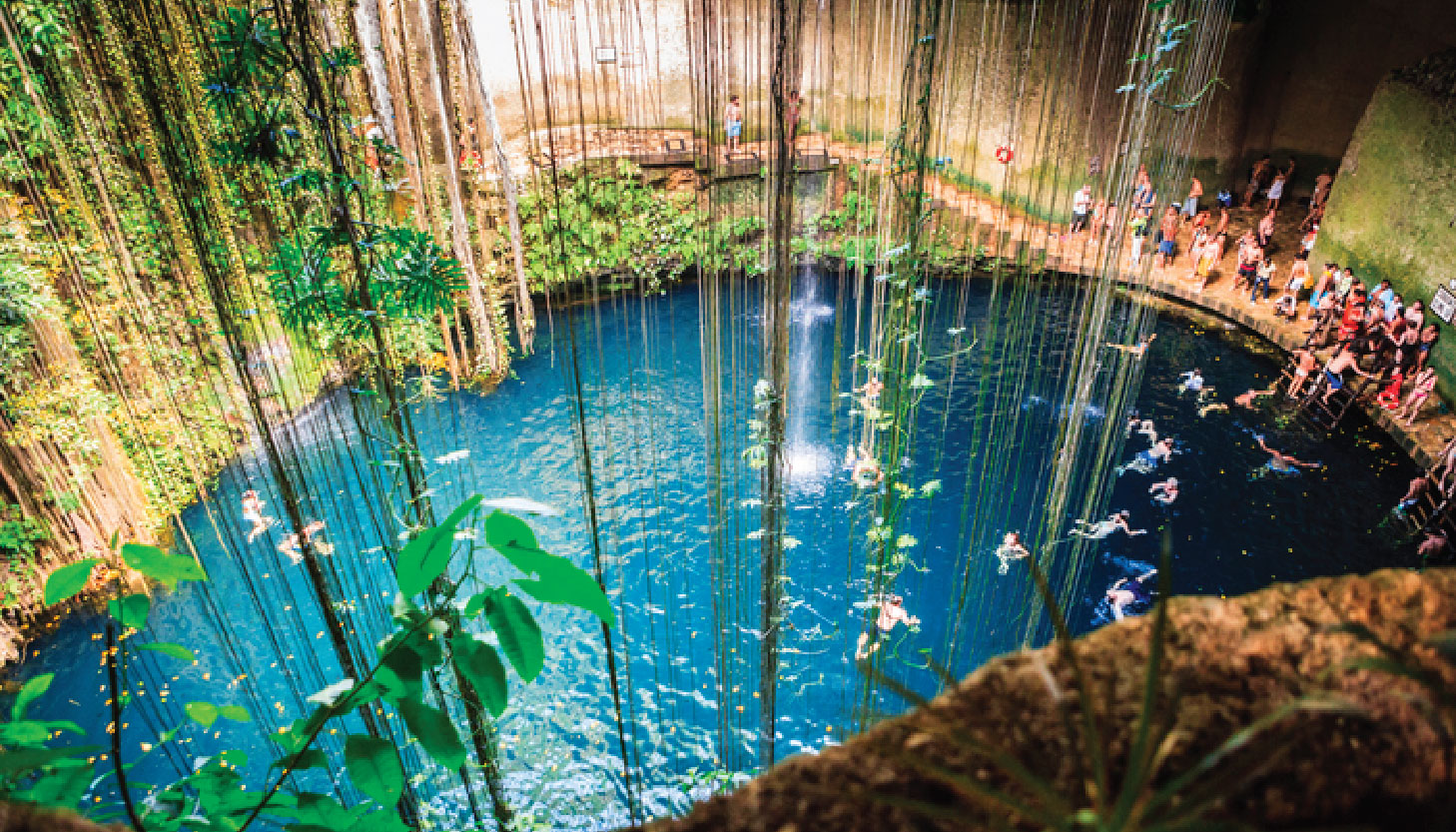 Sytun means “centre stone”. This is a semi-open cenote with a small hole in the vault where the sun’s rays pass through to highlight the blue water. Diving is not allowed here.

This cenote is located in the Suytun eco cattle ranch just 8km outside of Valladolid.

An open cenote in the shape of a half-moon that’s ideal for snorkelling and diving.

Gran Cenote is located 4km from the Tulum archaeological ruins and is one of the most famous cenotes in the Riviera Maya.

The cenote is perfect for diving and exploring the caves with a combination of fresh and saltwater.

Xkekén in the Mayan language means pig. The story goes that a pig from a local farm disappeared, but when it returned later, it was covered in mud, even though there was a drought at the time. The farmer decided to follow the pig the next time it left the farm and discovered the happy pig rolling in the mud at the edge of the water inside the cenote.

Located just 3km from Valladolid, this semi-open cenote is full of stalactites hanging from the vault like sharp tusks and the opening at the top allows the sun’s rays to reach the water.

Cenote Sagrado is located near the Chichen Itzá archaeological site and is one of the best-known cenotes because of the Mayan ritual offerings and sacrifices in the vicinity and the objects found at the bottom of the water.

This is an open cenote which measures 60m in diameter, and the almost vertical walls are 15m high. 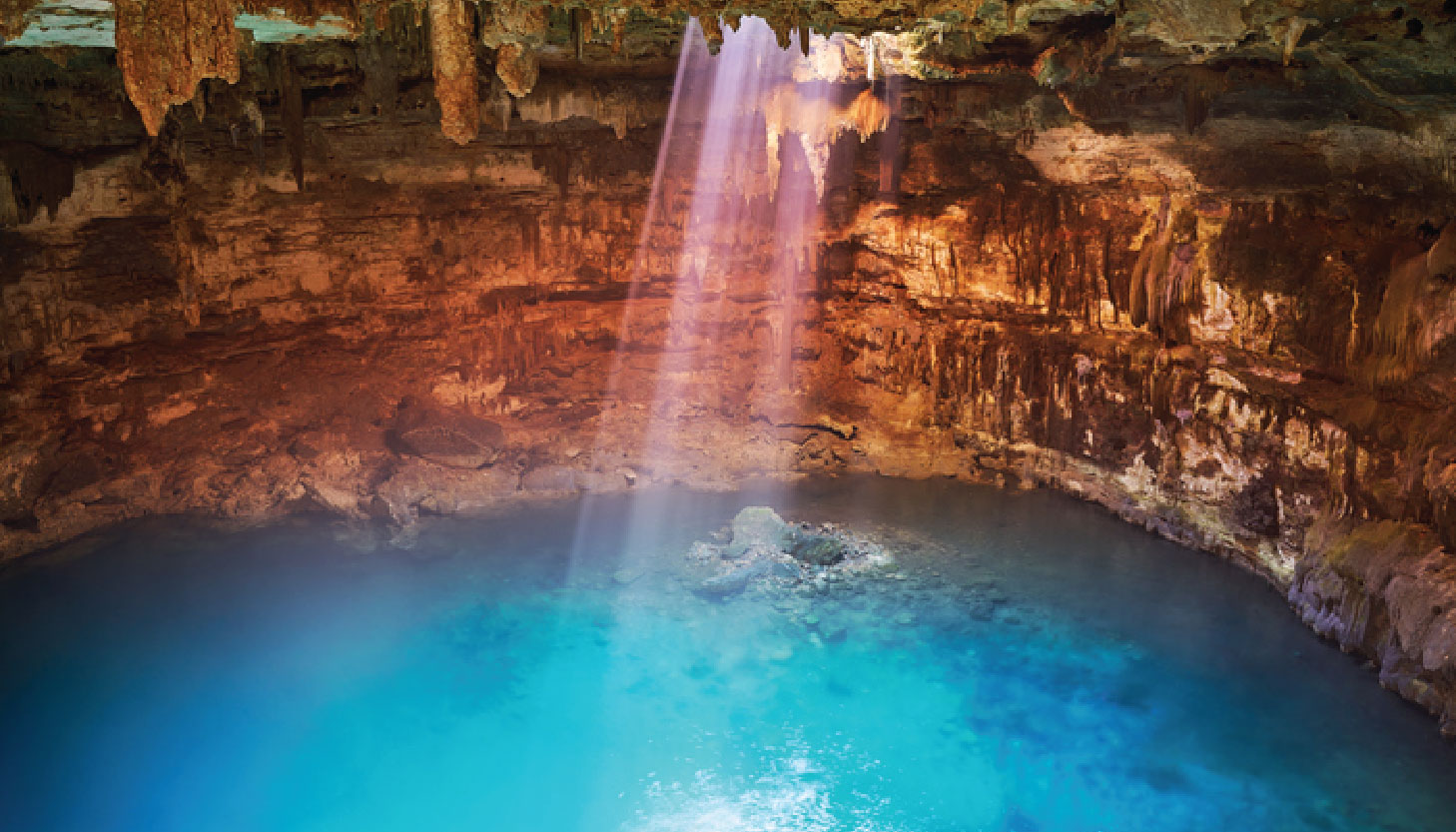 It is located 25km from Playa del Carmen in the state of Quintana Roo, and as you may have guessed, the name refers to the Taj Mahal.

The first explorers who went inside the cenote gave it the name Taj Mahal because of the beauty of the passages and cave system.

The name was later changed to Tajma-Ha, as “Ha” means water in the Mayan language.

This is one of the best cenotes for diving because of its spectacular caverns and the play of light on the fresh and saltwater.

This is the paradise of cavern diving for many divers and is made up of three caves connected through underground rivers. There are two diving routes, and each one takes about 45 minutes.

This is located 24km from Tulum.

Located 26km south of Playa del Carmen, this is the perfect cenote for snorkelling and diving, or just to spend the day relaxing in the sun surrounded by nature.

The main pool is an open cenote but connects with other cavern type cenotes along 10km of underwater chambers and caves.

Now that you know which cenotes to visit, all that’s left is to book your accommodation and get ready for the adventure!