Trending
You are at:Home»Tourism Insight»The National Museum of Beirut: a hidden treasure, waiting to be discovered
By LookOut on Tuesday February 6th, 2018 Tourism Insight

Beirut is one of the most diverse cities in the Middle East, a place where different communities thrive side by side, adding to the richness of a multicultural urban centre that welcomes citizens from all over the world.

Beirut is also the commercial heart of Lebanon and an important cultural hub, with 21 universities. Among its artistic institutions, one of the best-known is the National Museum of Beirut, housed in an iconic building that still bears the scars of the civil war. In fact, it was closed for 18 years, and a multi-million dollar investment was required before it could finally open its doors again in 1993.

Inside, the archaeological artefacts on show range from prehistory to the Mamluk period, and are exhibited amidst the stunning mosaics that can be seen throughout the building’s interior.

Despite its modest size, the museum’s exhibits are beautifully preserved and cared for, making it a must-see for anyone visiting the city.

Walking around the building is like taking a journey back in time. The collection is spread over two floors, with a basement gallery that showcases funerary art, including highlights such as the Tomb of Tyre, a Roman mausoleum of the second century AD.

Another prominent exhibit, dating from the 8th century BC, is the sarcophagus of Ahiram, a king of the city of Byblos, north of Beirut. Its inscriptions include some of the first known examples of the Phoenician alphabet, the source of all Western alphabets. In fact, Lebanon has the world’s largest collection of anthropoid sarcophagi — stone coffins whose lids represent a human form — dating back to as early as the 6th century BC.

There are also three naturally preserved mummies from the 8th century AD, found in a cave in the Qadisha valley.

Over 500 objects give the visitor a sense of the many civilisations that have had a presence in Lebanon. The museum also offers an insight into the way burial customs changed over time, from wedge-shaped tombs to cremation during the Phoenician period and decorated urns in the Byzantine era. 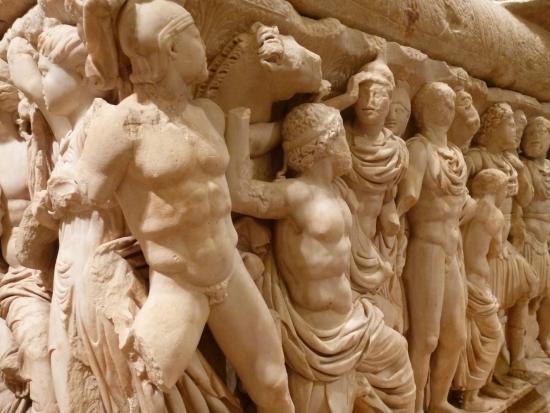 The Roman sculptures and images of deities on the two upper floors are stunning, as are the remains of capitals and the great mosques of the Mamluk period.

The National Museum of Beirut is also an international symbol of peace. After the devastating damage suffered during the war, which became evident when the ceasefire was called in 1991, it took years to get back on its feet. Its re-opening after almost two decades symbolised the rebirth of a whole society.

If you’re ready to pack your bags and discover the extraordinary history of the city, complete your adventure with a stay in the Le Royal Beirut ****, a majestic five-star hotel complex with views of the Mediterranean, its own aqua park and spa, and luxurious facilities.